I’m Still With Her – Birds on the Blog

I’m Still With Her

What do you do when you’re born to serve, and do so very well. You’re respected by your peers and other world leaders but denied the opportunity by your own country? 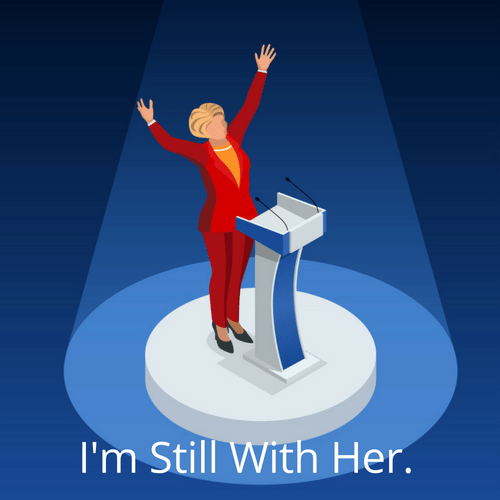 I’d like think I know how Hillary Clinton feels right now, but it’s hard to articulate 영웅시대 ost. It sticks in my throat like a piece of crusty, old bread.

How do you feel when you do the right thing? You take the high ground, you don’t sink to their level and you shut up rather than humiliate someone? And you do it every single day as it’s the right thing to do. But it’s interpreted as not good enough.

I feel crushed for Hillary Clinton, for myself and for other women.

Investing in it’s population is the best thing a country can do. No one chooses where they are born but they get to choose what they contribute to their country 3d chip.

In return, their country looks after them. It provides education, health care and a safe place to live and work. It’s the unspoken covenenant between a government and it’s people. Hillary understands this. She tried to make it happen with what she supported. Like most human beings it’s unlikely she got it right all of the time Download the light sack. She made her decisions based on the information she had. That may be better quality information than what the public has.

Healthcare that’s free is branded socialist. Any suggestion that a government should provide a safe place to live or work is turned into a hate campaign adobe acrobat 10 pro 다운로드. Movements like Black Lives Matter have to be explained to the majority because they don’t understand that because Black Lives Matter it doesn’t mean other lives don’t. Pointing a gun is seen to be a solution to all problems.

And there are deep problems for Trump to sort out. If he can. If he’s capable. I’m sure he’ll recommend stiffing the payments on NATO and other things in order to cut taxes for everyone Download Pixel Monster. Isn’t hindsight a wonderful thing?

Today I’m still with her.

I chose to think there’s a higher calling in the U.N for Hillary Clinton, or another international organisation. One where her skills would be appreciated. Where her warmth and kindness for her people would be felt, and she wouldn’t be berated for her gender 애니빵빵.

Hillary, if your aide is reading this and telling your our thoughts know that we were with you as a nasty woman, and we’re still with you. I hope Bill whisks you off to the Maldives for a month where you can regain your equilibrium. I hope you take a break from all the serving you’ve done and  grieve for what should’ve been, somewhere warm, sunny with ice cold mojitos 기상캐스터 다운로드.

I pray that history treats you with the kindness you deserve.

When you pass the presidential torch to Michelle Obama, may she have the strength you have, and the courage to use it. I hope you have the time and energy to campaign for her and use your influence for all of us.

But mostly, I hope that you’re able to recover from the knife in your heart.

I hope that you’re as okay as you can be in what must be the most difficult day of your life.

About the Author Jackie Groundsell

Dealing with the inner voice critic