Should we be offended by Louis Smith? – Birds on the Blog

Should we be offended by Louis Smith? 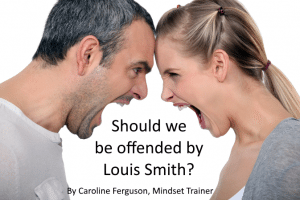 Jeremy chaired a discussion on whether or not Olympic-medal-winning gymnast Louis Smith’s punishment for being caught on video, mocking Muslim prayer rituals with Luke Carson, was excessive custom The Immortal Dance.

At least one person interviewed on the show was deeply offended by Smith’s behaviour. He was adamant that it crossed a line in terms of the freedom of expression that should be tolerated in a civilised society.

I’m not going to comment on Louis Smith’s behaviour. I do want to point out that, from a mindset point of view, offence can only exist where offence is taken convenience store tycoon.

When something offends us, we have a choice:

1 별이 빛나는 밤 mp3 다운로드. We can choose to react automatically and get stuck in negative emotions like outrage and distress.

This can feel really bad, even unbearable. In this frame of mind we’re likely to be critical and pass judgement on people and circumstances.

We’re affected not just mentally and emotionally, but physically too 심야 식당. Our bodies flood with stress chemicals and our heart rate and blood pressure soar.

Our behaviour is impacted too and we’re more likely to react in a knee-jerk way that may be counter-productive.

2. We can choose to take on board what’s happened and give ourselves time to process the event.

When we give ourselves space to reflect, we take a step back 파검기. We can assess what we believe about what’s happened, and what irrational demands we might be making about ourselves, others and the world.

Much as we’d like the world to run according to our rules, events DON’T HAVE TO go as we want. People don’t HAVE to behave the way we’d like them to 삼국지5 황금판. Insisting gets us nowhere except agitated.

Giving ourselves reflection time means we can turn our attention to the best outcome when we’re upset about something. We’re then able to work out what we can think and do to make that outcome more likely to happen.

We choose to feel offended – or not 24 downloads of Mr. Sean Shine.

When we choose to feel offended, we also choose the uncomfortable, “stuck” thoughts, feelings, physical symptoms and behaviour we experience. No-one else is doing that to us; we’re doing it to ourselves.

One of Jeremy Vine’s guests was massively offended by Smith’s and Carson’s antics in the video Download Shaolin Shuttlecock. While I sympathised with his passion and outrage, his emotions interfered with his ability to be rational. In one breath, he defended people’s entitlement to self-expression. In the next, he denied that Smith and Carson should have that right.

He was also unable to see that censoring Smith and Carson was one end of a line that, taken to its extreme, can lead to horrors like the murderous attempt to silence the French satirical magazine, Charlie Hebdo 다비치 8282 다운로드.

Suppose he had taken a different point of view?

What if this gentleman had chosen not to be personally offended (and offended on behalf of Islam), but to take a wider view of the two men’s behaviour and work out the best outcome?

He could, for example, have seen Louis Smith’s and Luke Carson’s actions as careless and ignorant, rather than deliberately inflammatory sense talk 다운로드. He could have spotted an opportunity to engage with the two men and enlighten them and the wider community.

Regardless of what Louis Smith may or may not get up to in his spare time, WE are responsible for how we think and feel about his actions.

The key to being able to respond to potentially disturbing events in a reflective, constructive way (rather than a reactive, knee-jerk way) comes down to one core mindset skill: SELF AWARENESS. This is the ability to hear and assess what’s going on in your own mind.

Being self aware means you’ll know when you’re winding yourself up about events that are beyond your control. And if you feel as passionately about those events as this interviewee did about Louis Smith’s actions, then self awareness will also empower you to work out the most effective and constructive response.

If you want to develop the essential life skill of self awareness, contact me for a chat.

About the Author Caroline Ferguson

Caroline is a cognitive behavioural hypnotherapist and Mindset Trainer. The right Mindset turns promise into power and makes the difference between who you are and who you could be. Caroline helps potential game-changers beat the limiting beliefs and unhelpful habits that stop them from living a life that matters. Is that you? If so, do get in touch.